A hot summer day, and he wouldn’t come outside until we put his boots on. He played in them all morning.

Who am I to protest? 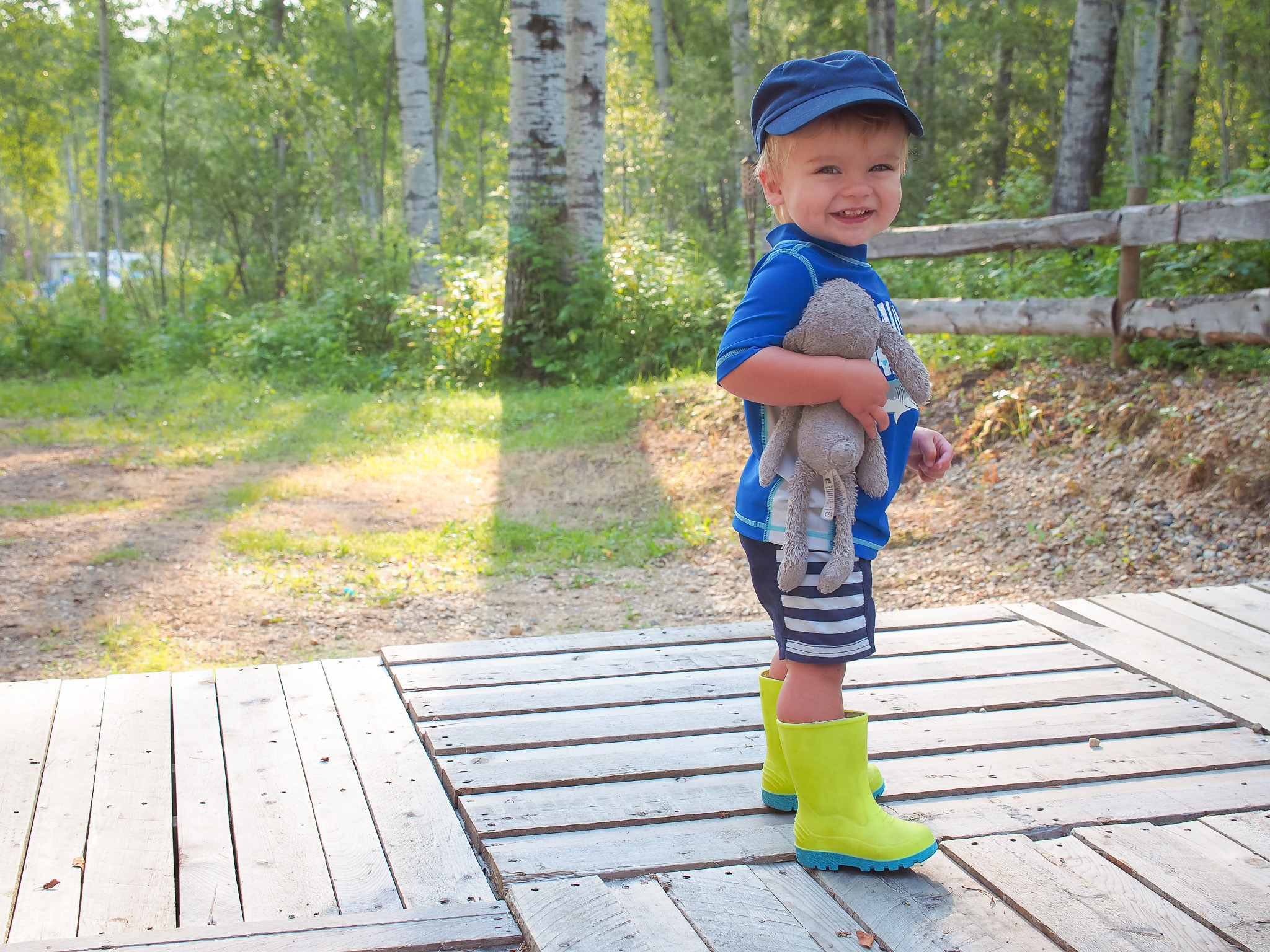 Easter weekend was a busy one. A little bit of work, a lot of family time, and big smiles and new adventures with Danger Man.

We headed out to Prairie Gardens to partake in their Easter celebration. Callum discovered mud…sheep (he wasn’t a fan!)…mud…a beautiful bunny…mud…a chic…mud. What do you think was his favourite part?! 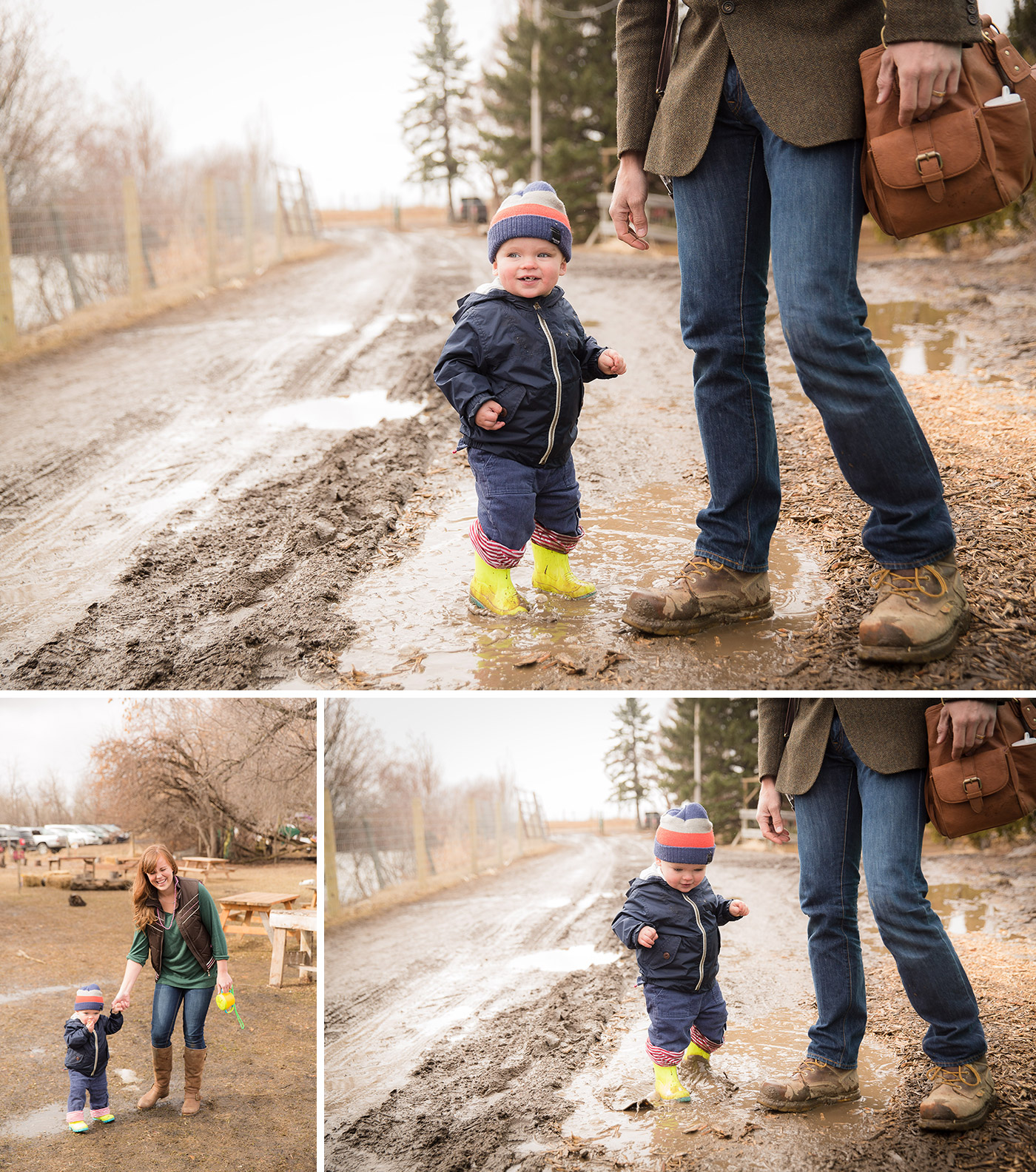 He was pretty uncomfortable with the bunny until I asked him if he was just like Beasley (his best friend, a stuffed animal). Then he giggled, grinned, and jumped right in.

More mud. I may be having some fun too. 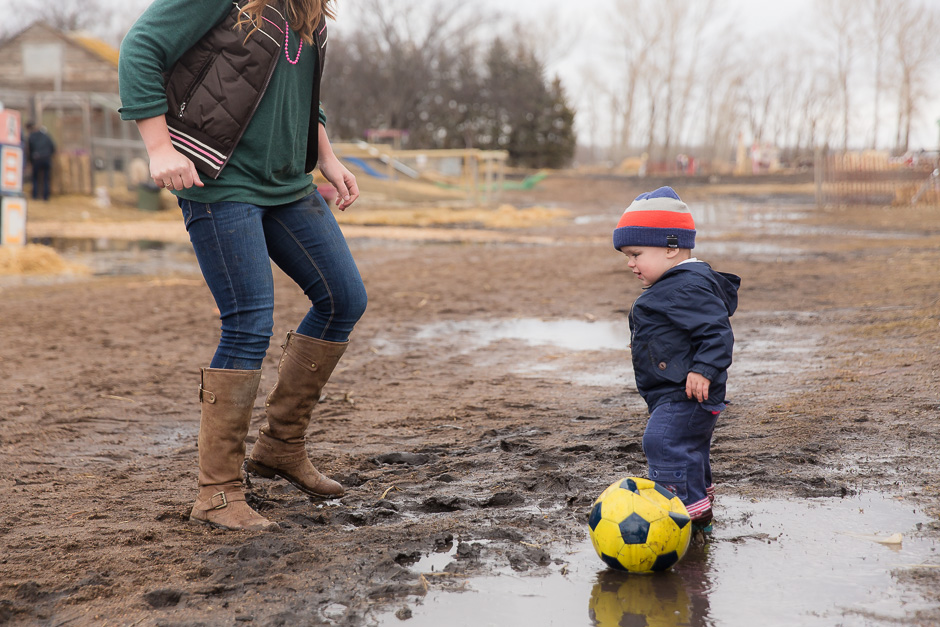 A chic?! Wow! He wasn’t sure of the meaning of “gentle” just yet, so Gareth had to watch him pretty closely. And WHO is this giant bunny?! He wasn’t the biggest fan.

We finished up the weekend with dinner at my bro’s house. It was busy and lovely. The only family photo we could muster was with Callum eating bread. Being able to get outside has made me feel so much better, the fresh air and sunshine and new experiences with Callum are just the best. It just makes life nicer.

Hope everyone had an absolutely lovely Easter.

The Boy in the Yellow Jacket

A day out for a walk through some beautiful big trees and along the coast, it finally wasn’t raining. And wouldn’t you know Callum slept through the entire thing – all two hours.

Into town and he was awake and happy to be there.  Especially to be going for a walk with Grandma and Beasley.

Just a couple steps after this photo was taken and Callum fell flat on his face. No hands out, nothing. A scrape all down the right side of his face was the result – and a very scared, upset, hurt little boy. I hadn’t put his feet all the way down into his shoes, and he tripped.

You know, having been a parent for a year I kind of was feeling that I was getting the hang of things. We had a routine going, Gareth and I had our strengths and our jobs and we were rolling along. And then Danger man has to change everything up with learning to walk! There is always going to be something new to throw me a curve ball, to keep me on my toes, to keep things interesting. Today it’s walking…soon it will be talking! Eek.

Luckily, even on the other side of the world, my mamma was ready to reassure me that things are going just fine.

Callum is nearly a year, and that means we were overdue to introduce him to the Motherland.

Flights from Edmonton to London have been suspended for the winter, so we had to fly from Calgary. It was either take a bus or catch a flight to even start our trip, and after flying to Mexico we knew we we needed the easiest method. Easiest means being held for the least amount of time for Callum, so we chose the flight.

The only available flight meant layover in Calgary, 8 hours to be exact, but roaming an airport sounded better than being trapped on a bus.

So we roamed and we played and Callum napped in his stroller.

We were doing quite well  until our flight to Gatwick was delayed by an hour. It was past bedtime by this point and the stroller had been gate-checked, so we strapped him into the carrier and walked…and walked…and walked. We walked so long I got blisters. But he was content so that was all that mattered.

Takeoff was hairy. An overtired, overheated baby is never fun. We stripped him down, held him tight, and luckily once he passed out, he slept for 80% of the flight. Having a seat for him did the trick.

We landed in Gatwick, picked up our luggage and we were off. A late flight meant we had to make up time to catch our train to Wales. From Gatwick by train to Victoria station, from Victoria to Paddington station on the London underground. A dash to switch from the tube to the train and we just made it onto our train to Cardiff. 2 hours later we pulled in. Grandad was awaiting his little man. Another hour and a hlaf drive and we arrived at the Roughley Headquarters.